At a busy intersection not far from where we once lived a billboard boasted, “WE’RE A CHURCH THAT DOESN’T PREACH MONEY!”  Funny.  My Bibles says a lot about money.

In fact, Luke’s second summary of early church life (4:32-37) is almost all about money.  That’s especially significant because many months (maybe even a year or so) has passed since his last summary (2:42-47).

All the believers were one in heart and mind.  No one claimed that any of his possessions was his own, but they shared everything they had.  With great power the apostles continued to testify to the resurrection of the Lord Jesus, and much grace was upon them all.  There were no needy persons among them. For from time to time those who owned lands or houses sold them, brought the money from the sales and put it at the apostles’ feet, and it was distributed to anyone as he had need.

The first sentence is key to this summary.  All the believers were one in heart and mind.  Commentator William J. Larkin Jr. writes, This phrase masterfully brings together both the Greek ideal of friendship–“a single soul [mia psyche] dwelling in two bodies” (Aristotle in Diogenes Laertius Lives of the Philosophers 5.20)–and the Old Testament ideal of total loyalty (1 Chron 12:39–referring to the devotion of David’s band of men in the wilderness).

I caught glimpses of unity like that over 44 years of pastoring.  Sadly, I also saw painful occasions where we suffered the opposite in shameful church splits.  Most of the time, though, our church unity registered somewhere in between.

This Acts’ oneness was more than a km-ba-ya moment around a campfire.  It was lived out by the whole church.  “No one claimed that any of his possessions was his own, but they shared everything they had” with the result that there “were no needy persons among them.”  This was especially significant, because Jerusalem’s economy was shaky at best, the country as a whole suffered through several famines, members from  Galilee and other places were away from their source of income and social and economic persecution added to their poverty (Acts 24:17; Romans 15:26).  This sacrificial love enabled the apostles to testify to the Lord Jesus’ resurrection “with great power.”

How, I wonder,  did the apostles pull 5000  members into such unity?  Fundraising projects?  Car-salesman-like persuasion?  It wasn’t the apostles at all.  It was the gracious work of God the Holy Spirit (“much grace was upon them all”).  Author Luke comments:  “For from time to time those who owned lands or houses sold them, brought the money from the sales and put it at the apostles’ feet, and it was distributed to anyone as he had need.”  In other words, they gave freely having been moved by the grace of God the Holy Spirit.

That’s extraordinary.   More accurately, that’s miraculous.   Who does that?  Maybe a multi-billionaire who can write off such gifts as “charitable giving” on his taxes.  But these people weren’t rich and enjoyed no tax deductions.  Without question, this was the result of Spirit- empowered, grace-produced oneness.  In passing, Luke identifies one example . . .

Joseph, a Levite from Cyprus, whom the apostles called Barnabas (which means Son of Encouragement), sold a field he owned and brought the money and put it at the apostles’ feet.

Why did the apostles nickname Joseph “Son of Encouragement”?  Perhaps in part because his Spirit-inspired gift brought heavy-hearted people hope.  But there was two other people whose gift brought a distinctly different result . . .

Now a man named Ananias, together with his wife Sapphira, also sold a piece of property.  With his wife’s full knowledge he kept back part of the money for himself, but brought the rest and put it at the apostles’ feet. Then Peter said, “Ananias, how is it that Satan has so filled your heart that you have lied to the Holy Spirit and have kept for yourself some of the money you received for the land?   Didn’t it belong to you before it was sold? And after it was sold, wasn’t the money at your disposal? What made you think of doing such a thing? You have not lied to men but to God.”  When Ananias heard this, he fell down and died. And great fear seized all who heard what had happened.  Then the young men came forward, wrapped up his body, and carried him out and buried him.  About three hours later his wife came in, not knowing what had happened.  Peter asked her, “Tell me, is this the price you and Ananias got for the land?” “Yes,” she said, “that is the price.”  Peter said to her, “How could you agree to test the Spirit of the Lord? Look! The feet of the men who buried your husband are at the door, and they will carry you out also.”  At that moment she fell down at his feet and died. Then the young men came in and, finding her dead, carried her out and buried her beside her husband.  Great fear seized the whole church and all who heard about these events.

Even though this narrative is pretty straightforward, a few observations . . .

—Apparently these two wanted the praise without the price.
—I think the Holy Spirit revealed Ananias’ deceit to Peter.
—Satan was the “power” behind Ananias’ sin.
—Ananias’ lie was primarily to God the Holy Spirit (who was present in the believers), only secondarily to the apostles.
—Death seems an extreme penalty for what we today call “spin”.  But  spoken in God’s presence, it’s a capital crime.
—The phobos (Greek) that seized everyone was not “reverence” (Romans 3:18), but “terror”.

First warning:  God punishes sin.  So, don’t mess with God.  He is to be feared, not casually dismissed.  The Good News part of this warning is that when Jesus died, he was punished for the sins of all who would believe in him.

Second warning:  God sets the rules.  We judge Ananias’ sin as small or even shrewd.  But life isn’t our “game”, it’s God’s.  And in the Bible he instructed us how it’s to be “played”.

Third warning:  The Spirit may move us out of our comfort zone.  Not to spotlight ourselves, but to point people to Jesus.

One reward:  We can bless others with our money and possessions.  Not only will that meet their needs and bring glory to the Lord; it will give us great joy that can come no other way.

Fill us with the Holy Spirit, Lord,
so we will be radical givers
as you have been to us. 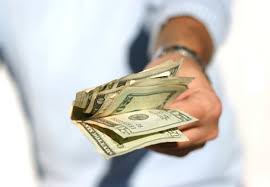 End of Tax Write-Off for Tithes?

“Christian colleges and churches need to get prepared. We must decide which is more important to us — our tax exemption or our religious convictions”  (Michael Farris, chairman of the Home School Legal Defense Association and chancellor of Patrick Henry College).

“The loss of tax-exempt status would put countless churches and religious institutions out of business, simply because the burden of property taxes and loss of charitable support would cripple their ability to sustain their mission” (Dr. Albert Mohler, president of Southern Baptist Theological Seminary).

What’s this scary scenario all about?   On Tuesday, April 28th, the U.S. Supreme Court began two days of historical oral arguments to decide (in June) the answer to this question:  Can members of the same sex get married?

An ominous moment of truth struck when Justice Alito asked U.S. Solicitor General Donald Verilli, appearing on behalf of the government, “In the Bob Jones case (more below), the court held that a college was not entitled to tax exempt status if it opposed interracial marriage or interracial dating.  So, would the same apply to a university or college if it opposed same-sex marriage?”  Verilli explained that he would need to know more specifics, but “It’s certainly going to be an issue.  I don’t deny that.”

What about churches?  Colleges, religious high schools, grade schools and any other religious institution will confront the same issue.  All these institutions are tax-exempt under the same IRS code section.  Therefore, the IRS could revoke even local churches’ tax-exempt status.  It might take years to reach that level, but if it starts with Christian colleges, it will almost certainly “trickle down” to the local church.

What’s the connection between same-sex marriage and tax-exemption?  The same connection that existed between Bob Jones University and tax-exemption.  In 1983 the IRS revoked Bob Jones University’s tax exempt status because of its policies on interracial dating and marriage.  BJU’s defense?  The free exercise of religion. The Court rejected the defense, holding that the government’s goal of eradicating racial discrimination in marriage was more important than BJU’s religious rights.  So if the Supreme Court makes same-sex marriage legal nationwide, and a Christian college or grade school refuses to admit same-sex married couples (or children of such a union), the IRS might very well respond as it did to BJU.  That would mean if a local church refuses membership to same-sex couples (or preaches against same-sex marriage), the IRS might very well revoke that church’s tax-exemption.

What’s the big deal if a local church is no longer tax-exempt?  Two “big deals.”  First, while the local church typically doesn’t make a profit (which would be taxable), it does have property.  That means property taxes.  And the more property and building, the more tax.  Most struggle to stay afloat now.

Second, money-givers to the church could no longer deduct what they give.  I doubt any of us thinks as we drop our check in the offering plate, “Here’s another deduction”.  But it sure would jolt us on that good old 1040!   Might be tougher to tithe (or give) faithfully and freely when Uncle Sam offers no credit!

Aren’t we far off from no more tithing-tax-deduction?  Probably.  And it may never come.  But:  if our giving were no longer tax-deductible, would we give less?  (Some Christians look a little Scrooge-like at offering time now!  That was back in New Jersey long ago.) And that brings us full-circle to  Michael Farris’ provoking declaration:

“We must decide which is more important to us — our tax exemption or our religious convictions.”

Now is the time!  Since I’m not the pastor now, nobody can accuse me of being money-hungry.  (So what if they do?  Their argument would be with Jesus, not me.)  I want to see SonRise grow stronger and healthier, but I don’t have a horse in this race, as they say.  And I firmly believe that one sign of a church’s spiritual health is the giving of its members.  If the Lord doesn’t have my money, he probably doesn’t have my heart.  Before the tax storm hits (if it will, only the Lord knows) we would be wise to examine our giving.

Some Scriptures to study as we consider all this . . .

“The silver is mine and the gold is mine,” declares the LORD Almighty (Haggai 2:8).

Remember the LORD your God,
for it is he who gives you the ability to produce wealth (Deuteronomy 8:18).

No one can serve two masters,
for either he will hate the one and love the other,
or he will be devoted to the one and despise the other.
You cannot serve God and money (Matthew 6:24).

Be on your guard against all kinds of greed;
a man’s life does not consist in the abundance of his possessions (Luke 12:15).

See that you also excel in this grace of giving (2 Corinthians 8:7).

Now he who supplies seed to the sower and bread for food
will also supply and increase your store of seed
and will enlarge the harvest of your righteousness.
You will be enriched in every way
so that you can be generous on every occasion (2 Corinthians 9:10,11).

The final quote below isn’t Scripture, but maybe should be.  (I wonder if God regrets not having Paul write this?  Just kidding.)  It’s from martyred missionary Jim Eliott–words we shouldn’t skim but soak in . . .